Sunday 2nd December dawned and our day began with a friendly and relaxed sherry reception for everyone in the Church Hall.

St Wilfrid’s Church in Kirkby in Ashfield looked impressive, adorned with emblems of the Order of St Lazarus, as the Commandery of King Offa entered to the accompaniment of our very own Piper, Confrere Professor Robert Ashford. Then followed the first carol, ‘Once in royal David’s city’, led by Confrere John Bullock (organ) and Mr Tony Wade (trumpeter).

Over sixty people, including representatives from the Leprosy Mission and Nepal Leprosy Trust, attended the Advent Service, lead by our Senior Chaplain, the Reverend John Burgess.   Lessons were read by members and guests, including the Chairman of Ashfield District Council, Councillor Mrs Glenys Maxwell.

After the sixth lesson, Saint Matthew Chapter 2, verses 1–12, read by the Commander, Chevalier Mario Rizzardi, three female soloists sang specific verses during the carol, ‘We three kings of Orient are’.

The Prayers of Intercession were led by The Venerable (Air Vice-Marshal) Robin Turner, after which the Commandery Sword was dedicated by the Senior Chaplain.

‘Hark, the herald angels sing’ was the chosen recessional carol, as the Commandery procession, directed by Marshal Emeritus Chevalier Peter Salt, left the church, led by our Piper.

After pre-lunch drinks, and a warm welcome by the Commander, a scrumptious three-course lunch followed at The Oakham Suite in Mansfield.   There was a mighty rendition of the National Anthem, accompanied on the piano by the Chancellor, Confrere John Bullock.

A three-prize raffle, raising £255 for our chosen charities, was drawn after the Loyal Toast and Grand Master’s Toast.  Major The Chevalier Geoffrey Berry auctioned the most delicious and very large Pork Pie, (made by a Yorkshire connoisseur in this particular field) which enhanced funds by £46.  Gregarious Geoffrey then read out, in a typical Yorkshire accent, ‘Going to T’Messiah’, an account of one friend reporting a performance of Handel’s ‘Messiah’ to another in the local pub, which despite the lunch being held in Nottinghamshire, truly brought the house down with much raucous laughter.

Presentation of Brevets and Certificates by our Commander to various members ensued. 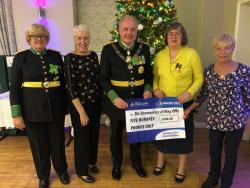 Mrs Carol Bullock, former Provincial Grand Master of The Nottingham Trent District Order of Oddfellows presented Chevalier Mario Rizzardi with a cheque for the magnificent amount of £500, which swelled our funds to help make a difference in the lives of others.

Mrs Sue Wells, on behalf of Nepal Leprosy Trust, received a cheque for £250 from King Offa and was delighted to explain briefly that both her and her husband, Mr Mike Wells, had just returned from a momentous visit to Nepal.

The festivities ended around 4.00pm - a wonderful and successful day for the Commandery.