On the evening of Sunday 11th November 2018, at the invitation of the Very Rev’d Dr Sebastian Jones Cong Orat, ChLJ, Moderator of the Cardiff Oratory, Dean of Newman Hall and Executive Chaplain of the Commandery of Wales, members of the Commandery joined the congregation of the University Catholic Chaplaincy and the residents of Nazareth House at the University Church for the Act of Remembrance.  These commemorations took on extra poignancy with this year being the centenary of the signing of the Armistice ending the First World War.  Captain Sir Norman Lloyd-Edwards KCVO, GCStJ, KCLJ, GOMLJ, RNR and Colonel the Chevalier Julian Tyson-Woodcock VR, KLJ laid the wreaths during the Act of Remembrance.  The intercessions were offered by the Rev’d David Canon Hathaway TD, SChLJ. 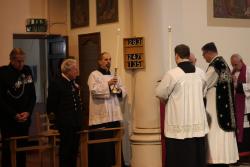 Following the Act of Remembrance, a Requiem Mass for the Fallen was celebrated by Fr Alexander Gee Cong Orat, Warden of Newman Hall, assisted by Fr Sebastian Jones and Fr David Hathaway.  The Commander, Chevalier Dr David Woolf KCLJ, was the MC supported by the altar servers of the Catholic Chaplaincy.  The Mass setting, Missa pro Defunctis a 5 by Cristóbal de Morales, was sung by the Newman Hall Schola under the direction of Tomos Watkins. 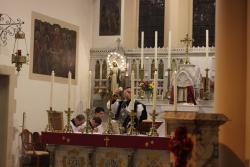 It was a great pleasure for the members of the Commandery that we were joined by Mrs Rosemary Bartle-Jones for her first visit to the University Church.  Rosemary is the widow of the late His Excellency the Major Huw Bartle-Jones GCLJ, the first Commander of Wales.  The thurible used at the Mass, which is on loan to the University Church, was purchased for the Commandery by Huw.  At the reception in Newman Hall after Mass, Rosemary also saw the icon of St Lazarus, given by Huw, that previously had been housed in the now decommissioned St Lazarus Chapel at Welsh St Donats.