Chevalier Peter Salt passed to higher service on 16th October 2020 at the age of 71. 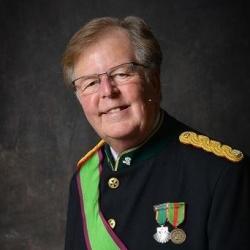 He joined the Order in 2008 as a founding member and first Chancellor of the Commandery of King Offa in the Grand Priory of England & Wales.  In that position, he was an active, hard-working leader. Most notably, he chaired the working party charged with recommending a mission statement and formulating a strategic plan to take the Commandery forward, and forged close working relationships with the regional heads of Lepra, Debra and the Leprosy Mission. In 2010, he embraced the Order internationally by participating in the pilgrimage to Santiago de Compostela in Spain.

In 2011 Peter became the Marshal of the Commandery and then Marshal of the Grand Priory of England and Wales, a post which he carried out with quiet efficiency and elegant precision. He was appointed Deputy Grand Marshal of the Order in 2016, and was also the International Quartermaster.

Peter was loved, respected and admired by all who were privileged to know him. His patience, charm and smiling good humour were combined with a deep loyalty to the Order and all it stood for.  He was appointed KCLJ in February 2013.

In his working life, Peter had served in the Derbyshire Constabulary. He had many hair-raising tales of arrests and dealings with dodgy characters! He held the Police Long Service & Good Conduct Medal.

Peter married Kate on 5th February 1972 at St Wilfrid’s Church, West Hallam, Derbyshire and they had a daughter Helen Catherine.

He was diagnosed with advanced prostate cancer in July 2012 but continued to enjoy a full life. He regularly visited Spain and journeyed to the USA, travelling extensively through that country.

His recent reception into the Roman Catholic Church, with The Most Excellent The Duke of Seville as his godfather,  was, for him, a significant moment on his earthly pilgrimage.

In the words of our Grand Master –

I received the news  about Chevalier Peter Salt's demise with great sadness. Peter was a wonderful kind gentleman and a jack-of-all-trades, versatile and hard working.  He will be missed by members worldwide since he represented the true spirit of our Order: brotherhood, help and sacrifice.

Writing about Peter, the Grand Prior of England & Wales, The Most Honourable The Marquis of Lothian PC DL GCLJ said -

It is with enormous sadness that I learned of the death of Chevalier Peter Salt. His enormous kindness and good humour was not only a gift to our Order but a lesson to us all. In the time I knew him I came to admire him tremendously. He seemed to me to be a living example of the best in our Order.  I pray that he will move swiftly to his reward in Heaven and that he may be specially welcomed by St Lazarus himself.

I count myself lucky to have known him and will be ever grateful for his quiet advice.

Our dear friend Peter’s last earthly journey took place on Wednesday 4th November at 2.00pm. A subdued but beautiful service in the ancient Saint Andrew’s Parish Church, in rural Stanley, Derbyshire, was conducted by the Vicar of the Parish and the Roman Catholic priest of the nearby church where Peter worshipped. The flag of St George in the churchyard flew at half-mast and many villagers gathered outside where loudspeakers relayed the service.

We felt privileged to be amongst the very few permitted to attend under the current rules. We provided a Guard of Honour to conducted Peter’s coffin into church. It was draped in the Saint Lazarus funeral pall, as well as bearing his policeman’s helmet. Peter’s favourite hymn,  ‘I vow to thee my country’ was played, though alas we were unable to join in the singing. Chevalier Norman Hunter Rose gave a short heartfelt eulogy, in addition to those given by a family friend and the priest.

Peter was laid to rest in the churchyard in the bright autumnal sunshine where we were able to sprinkle earth, rose petals and red roses onto the coffin.

It was a privilege to support Consoeur Kate Salt and daughter Helen on such a moving and poignant occasion.

Farewell Peter. May the Gates of Heaven open wide for you.

Please pray for the repose of his soul and the comfort of all those to whom he was dear, especially Kate his widow, and his daughter, Helen.