HM Lord Lieutenant of Nottinghamshire, Sir John Peace and Lady Peace were just two of the guests who attended our very special 10th Anniversary Service of Celebration & Renewal of Vows on a beautiful summer’s day in July in Southwell Minster, Nottinghamshire.

Councillor Mrs Sue Saddington, Chairman of Nottinghamshire County Council and her husband, were accompanied by several mayors from Nottinghamshire, who have now become ‘friends of King Offa’. 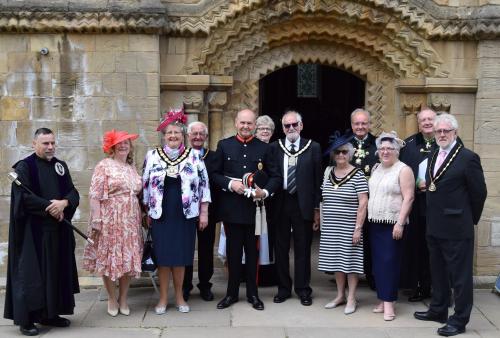 The Quire looked most colourful and impressive with emblems of the Order of St Lazarus as the Commandery of King Offa processed to the accompaniment of a glorious Fanfare, played by Simon Hogan (Assistant Director of Music).  Members and friends were in attendance from other Commanderies within the Grand Priory of England & Wales.

A warm welcome was extended to all by The Very Reverend Nicola Sullivan, Dean of Southwell.

The Service, led by our Senior Chaplain, The Reverend John Burgess, took its usual form, during which members renewed their vows before the Bailiff Emeritus,  Deputy Bailiff and the Commander of King Offa.

Miss Rebecca Sarginson, from The University of Nottingham, was our soprano soloist for this splendid occasion and her performances included Ode for the Birthday of Queen Anne;  Domine Deus - from the Gloria and Laudate Dominum – Vesperae Solennes de Confessore.

The preacher was The Reverend Alexander MacDonald, Chaplain-General of the Grand Bailiwick of Scotland, whose sermon to the congregation of over 70 was most lively and enlightening.

Hymns for this unique service included ‘Stand up, stand up for Jesus’, ‘Jerusalem the golden’, ‘Immortal, invisible, God only wise’, ‘Crown him with many crowns’, ‘Onward Christian soldiers, marching as to war’, and the Hymn for the Order – ‘Not for me a life of leisure’, written by our very own recently deceased member, Chevalier William Summers KCLJ, CMLJ.

A wonderful rendition of everyone singing The National Anthem preceded the long procession through the Nave to the Great West Door, where we were greeted by  Pipe Major The Chevalier David Waterton-Anderson of the Grand Bailiwick of Scotland, who was duly attired in the uniform of the 1st Battalion The Scots Guards – and his playing of the bagpipes most certainly enhanced this excellent event.

The Pipe Major led the procession down the High Street to the Saracen’s Head Hotel, where a scrumptious banquet followed pre-dinner drinks. After the customary toasts and speeches, Mr Allister du Plessis, Regional Manager for The Leprosy Mission, was presented with a cheque for £500 by our Secretary, Consoeur Pamela Levens, and he graciously responded to the welcome given to the guests.

A very acceptable Magnum of Champagne was raffled towards the end of the celebrations to help make a difference for those people affected by leprosy and other skin diseases.

A thoroughly brilliant day, leaving us all extremely pleased with the time and effort put in by many people to help our Order celebrate in public its tenth birthday.