The weekend began with our attendance at Choral Evensong held in the Quire of Ripon Cathedral - a most apt and holy place for the commencement of our Pilgrimage to this very special part of God's kingdom.

Those of us who stayed at the Royal Spa Hotel were pleased with our spacious rooms and the scrumptious food supplied to us, both for our Pilgrimage Dinner and the tasty breakfasts, (including the Kippers, and not forgetting, of course, the Marmite, a particular favourite of our Commander, Chevalier Mario Rizzardi).    The roast beef on Friday evening was probably the most delicious we have ever tasted - and the roast potatoes truly delightful. 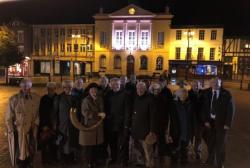 Witnessing the nightly ceremony of the Ripon Hornblower setting the watch, which has been observed every night for over 1,000 years was most interesting and enlightening, and the rain did not dampen our spirits for the evening.  It certainly was a joy to be part of this unusual nightly stroll.

The Service of Matins held at the St Mary Magdalen Leper Chapel on Saturday morning was a most spiritual and excellent start to our day. We are grateful to The Revd Prebendary Jackie Fox for her permission to hold our Service, conducted by our Senior Chaplain, The Revd John Burgess, and to learn more about this ancient Grade 1 listed building which has served the community and visitors since the 12th Century. 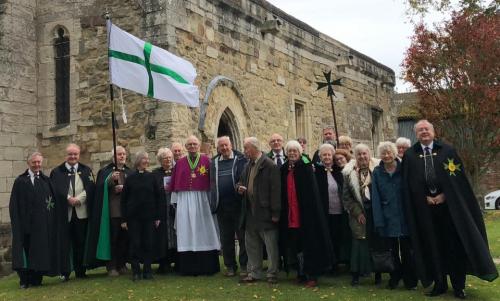 The provision for the care of lepers forms an interesting link with the Crusades of the 11th Century onwards. Returning Crusaders sometimes carried leprosy back with them to this country.  It was interesting to hear that any leper, born or living in the area during the 14th Century was to be given a garment and two pairs of shoes each year, plus a loaf of bread and ale daily; meat on meat days and fish on fish days.  Lepers and mendicant priests, as well as travellers, were to be given a night’s lodging and food

An Inquiry dated 1354 records that the Master of the Hospital declared he had demolished the leper house at the Hospital because it had fallen into decay from disuse with the decline in the incidence of leprosy.  The care of lepers was replaced by care and lodging for the sick and destitute of the City of Ripon.

Our visit to Fountains Abbey, one of the largest and best preserved ruined Cistercian monasteries in England, established by Benedictine monks from St Mary’s Abbey in York in 1132, and the Royal Studley Water Gardens was quite an energetic time, but greatly enjoyed by everyone.  It was, indeed, very fitting for our Chancellor, Confrere John Bullock, to say Prayers for us on what is believed to have been the site of the High Altar within the ruins of this worldwide heritage site.

The hosting of the tasty Dinner and mouth-watering desserts on Saturday evening at Mowbray House, Kirkby Malzeard, by our Receiver, Confrere Major Geoffrey Berry, along with the excellent help from 'Mrs Hughes' and 'Carson', enabled us all to have an absolutely tremendous time in the elegantly adorned rooms. We are indebted to Major Berry for opening up his Edwardian home to members and friends of King Offa, and for his generous hospitality to us. 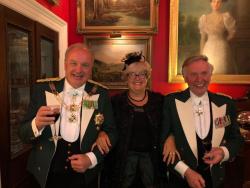 This occasion was particularly enhanced by the flowing punch, wine and port, and by the merry coach ride to and from Kirkby Malzeard, especially on the way back to the Royal Spa Hotel, which did include some spontaneous rapturous singing (or whatever one would have called it!)

The Service of Compline held in Saint Andrew's Church, Kirkby Malzeard, and conducted by The Revd John Burgess, was a holy, penultimate end to our spiritual weekend, augmented by the processional accompaniment of the Pipes from Pipe Major The Chevalier David Waterton-Anderson of The Grand Bailiwick of Scotland.

The surprise of the dynamic fireworks was a fabulous and resounding conclusion to our Pilgrimage to Ripon.