The wonderful sunshine certainly enhanced the King Offa Commemoration Walk in the beautiful surroundings of Locko Park in Derbyshire, to the site of the former medieval Leprosarium and Preceptory, established there in the 13th Century by the Order of St Lazarus.

The site was moated and came with associated outbuildings, fishponds, and a spring, known as St Ann’s Well.  Members and friends who joined in the walk were able to view a stone under which there are still signs of a well, by the side of the field, which has never been mowed, and is only visited by ruminating cows, and very occasionally, human beings. 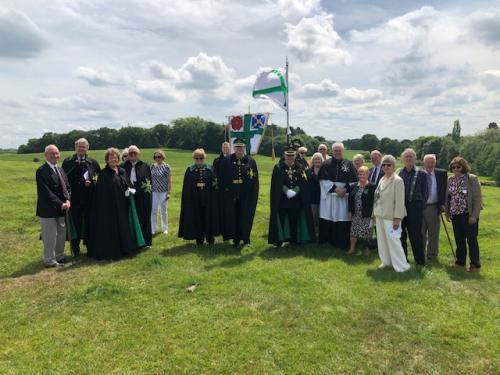 The name ‘Locko’ is derived partly from the old French ‘loques’ meaning rags (bandages) in reference to the strips of lint which were used in the hospital and were applied to sores.

Like many Lazarite hospitals, it was built at a distance from the town, often on the main road, or where there was passing traffic.  To maintain themselves, the lepers needed to beg for alms and trade, a part of this trade was to offer to say prayers for individuals.

After a short prayer by our Chaplain, The Reverend Kevin Charles, everyone made their way back down the field to the front of Locko Hall, where the Commemoration took place.  ‘The Last Post’ was sounded by our Commandery Trumpeter, Mr Tony Wade, followed by a moment of silence, then ‘Reveille’, ending this brief Memorial Observance with Prayers, led by our Senior Chaplain, The Reverend John Burgess.

Drinks were served in the Billiard Room, after which Festal Evensong was held in the private family chapel, which pre-dates the main house, being built in 1669.  The Chapel houses a Snetzler 4 stop chamber organ, made in 1779, and which was melodiously played by our Chancellor, Confrere John Bullock.

A rather scrumptious and plentiful Buffet ensued, again in the Billiard Room, followed by the drawing of the excellent Raffle, which raised £175.

90th birthday congratulations were extended to our very own Dame Joyce Summers towards the end of the afternoon, during which a mouth-watering birthday cake was presented to her, made  by a Commandery Hostess, Mrs. Sheila Reid.

We are indebted to the generosity of Mrs Lucy Palmer, the latest member of the Drury Lowe family who have owned the estate for the last 275 years, for her permission to hold our event again at Locko Park and Hall.

Mrs Palmer, and her husband, David, have established ‘The Locko Fund for Children’, which is a funding stream, delivered by ‘Foundation Derbyshire’, a local charity providing vital funds to community and voluntary groups across Derbyshire.

We are happy to announce that through this successful event, our Commander, Chevalier Mario Rizzardi, is delighted to donate £250 from King Offa to this very worthwhile cause, plus raising further funds for our own chosen charities.

A splendid afternoon of celebration and fellowship, greatly enjoyed by everyone and which would not have taken place without the help of many members and friends.  Thank you.