The annual service of re-dedication for the Commandery of London & Westminster took place on Saturday 2 March at St Pancras Old Church, London, by kind permission of Fr. James Elston AChLJ.

Around 30 members of the Commandery gathered in this historic church, where we received a warm welcome from the parishioners.  As we were reminded, the Hospital for Tropical Diseases, where many lepers were treated in the past, had been located very close by until as recently as 1998, so it was a most appropriate setting for our gathering. 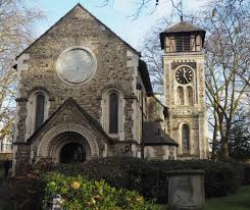 Our service was led by the Commandery Chaplain, Fr. Paul Bagott SChLJ, with music, including Peter Hurford’s lovely Litany to the Holy Spirit, provided by Confrere Edward Dobson OLJ and the St Lazarus Singers.

Fr. Paul’s sermon focussed on the Beatitudes, which are at the heart of our commitment as Members of the Order of St Lazarus.  He reminded us that the word Beatitude could be translated from the Spanish as ‘Good adventure’ and challenged us to embark on that adventure, walking in the footsteps of modern saints like Archbishop Oscar Romero, who famously defended the poor and underprivileged in his home country of El Salvador.

Following our re-affirmation of our knightly vows, a short AGM was held, at which our Commander, Chev. Damian Riddle KLJ, confirmed the appointment of Commandery officers for the coming year and presented the accounts for 2018.  Members of the Commandery were particularly encouraged to learn that arrangements are now almost complete for our first Commandery bursary to a medical student undertaking an elective placement in a leprosy-related field, and Chev. Roger France KLJ was thanked for his work in setting this up.  We look forward to receiving reports of the elective in due course and hope to meet the student concerned when she returns to the UK later this year.

Once all the formalities had been completed, we adjourned to a nearby restaurant for a well-earned lunch – a most enjoyable and convivial way to end a very worthwhile day.