The Commandery of the Midlands – King Offa, changes the lives of those with Leprosy

The Commandery of the Midlands - King Offa - held a splendid 10th Anniversary Celebration in Ilkeston on Saturday, 6th April 2019, culminating in an amazing presentation of generous cheques on behalf of the Order of St Lazarus to Leprosy Charities, which included The Leprosy Mission, Lepra and Nepal Leprosy Trust.

The afternoon began with a celebratory Evensong held in St Mary the Virgin Church in the Market Place, Ilkeston, which has stood on its present site since the mid 12th Century.  The organ, which was played by our very own Chancellor, Confrere John Bullock, was purchased from St John’s Church in Paddington, London in 1866 and is believed to have been used by the famous German composer, Mendelssohn.

Members and friends paraded across the historic Market Place led by our Commandery Trumpeter, Mr Anthony Wade, to the beautiful ‘Green Spire’ Church, where there was a magnificent band concert by Ilkeston Brass. Their programme was extremely varied, with lively audience participation, and it was superb to see, and hear, young people perform – such tremendous talent! 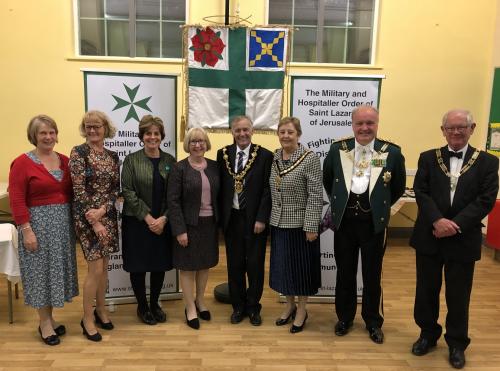 Following the rather scrumptious refreshments, Mrs Maggie Throup MP, on behalf of the Order of St Lazarus, made a series of donations to leprosy charities.

The Easter Raffle had many prizes, thanks to the generosity of members and their guests, and raised the excellent amount of £235.

It was an extraordinary day, enjoyed by everyone who came to join us, and which will help change the lives of people affected by leprosy around the world today.