In a scene somewhat reminiscent of the Epiphany liturgy described by the Dowager Empress Helena in the eponymous novel by Evelyn Waugh, three priests of three ecclesial traditions were guests in the sanctuary on Saturday 5th January 2019 at Nazareth House for the Commandery of Wales Epiphany Vespers.  The ecumenical nature of our Order was emphasised by the presence of Fr Mark Underwood (Russian Orthodox), Canon Brendan Clover SChLJ (Anglican) and Canon David Hathaway SChLJ (Catholic).

Before Vespers the old Commandery flag was laid up.  New colours and a 5’ x 13’ heraldic standard were presented and blessed by the Executive Chaplain, the Very Rev’d Dr Sebastian Jones Cong Orat, ChLJ.

The heraldic standard was given in memory of our late Chaplain, Fr John Owen SChLJ, who died before Christmas.

Fr Sebastian, assisted by Fr Dominic Edwards Cong Orat, of the Birmingham Oratory, and Bro Ambrose, sang Solemn First Vespers of the Epiphany of Our Lord, accompanied by the Newman Schola under the direction of Tomos Watkins.  The Commander, Chevalier Dr David Woolf KCLJ, was the MC.  The congregation joined in with rousing renditions of the great Epiphany hymns As with gladness men of old and Bethlehem, of noblest cities.  Canon David Hathaway SChLJ preached a thought-provoking homily linking the journey we all make in the Faith to the progress of the Magi as they travelled to worship the infant Christ child.  He went on to liken the mystical gifts offered by the Magi to the phenomenal £10k of charitable giving raised and distributed over the past year by the Commandery of Wales to a number of projects.  Canon Brendan Clover SChLJ, Executive Chaplain, led the Commandery intercessions. 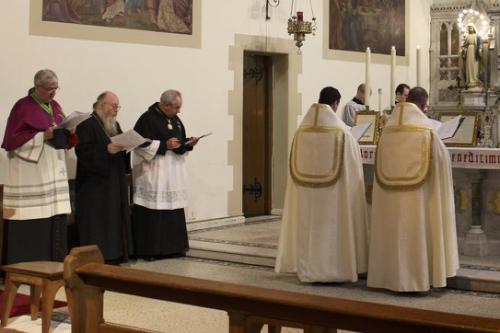 Vespers concluded with the Schola singing a sublime setting of the Alma Mater Redemptoris by Palestrina.  The recessional was accompanied by a boisterous rendition of the Boar’s Head Carol of Queen’s College, Oxford.

Following preprandial drinks and canapés in the library, an Epiphany feast was served in the Newman Hall refectory.  Toasts were proposed by: Captain Sir Norman Lloyd-Edwards KCVO, GCStJ, KCLJ, GOMLJ; the Commander, the Chevalier Dr David Woolf KCLJ; the Deputy-Marshal, Confrère Rhys Jenkins OLJ; and Fr Sebastian, Moderator of the Cardiff Oratory and Dean of Newman Hall.  To complement our festivities Confrères Neil Buffin and Craig Williams demonstrated their culinary talents by producing the Epiphany delicacy galette des rois complete with crowns presented to those who found a gift in their portion.  Confrère Oliver Wannell MLJ closed proceedings by directing a lively singing of We three Kings of Orient are.  A collection was taken during the evening to mark World Leprosy Day at the end of January 2019 and for the work of the Order, which raised over £1,000.  This appeal will remain open until the end of January.