Inspired by a rallying pre-pilgrimage itinerary message from Fr Ian Evans QHC, SChLJ, the Chaplain-General, eighteen pilgrims, under the auspices of the Commandery of Wales, made the 250-mile journey on Friday 22nd July 2016 to the Shrine of Our Lady of Walsingham.  Six of the group were first time Walsingham pilgrims.

After Vespers and supper, the pilgrim group gathered in The Orangery for an illustrated lecture on the history of Walsingham given by the Commander of Wales, Dr David Woolf KLJ, a Member of the Order of Our Lady of Walsingham. 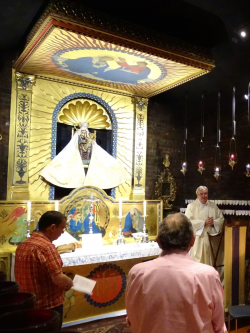 Early the following morning the pilgrims were given a guided tour of the Shrine grounds by Tessa Hobbs, the Landscape Gardener who was responsible for the total redesign of the grounds in 2004 and its subsequent management.

Tessa explained how the grounds had been designed to balance the need for a peaceful space for quiet, private contemplation, with the facility to accommodate large liturgical celebrations.

Later in the morning, Canon Brendan Clover, ChLJ MMLJ, a Chaplain of the Commandery, celebrated Mass in the Holy House for the Anglican pilgrims.

After lunch the pilgrims gathered in the village car park, next to the site of the medieval Lazar House (leper hostel).  In glorious summer sunshine we made our way along the Holy Mile to the Slipper Chapel at the Basilica of Our Lady of Walsingham, following the route of the former Fakenham to Walsingham branch line.  We paused briefly at the old village railway station, now converted to an Orthodox chapel, to recall the first pilgrimage to Walsingham organised by Fr Alfred Hope Patten in 1922.

Having entered through the Year of Mercy Jubilee Holy Door at the Slipper Chapel, we were welcomed to the Basilica by the Rector, the Rt Revd Monsignor John Armitage, who presided at Commandery Vespers, assisted by Fr Brendan and Dr Woolf.

In December 2015 the Holy Father, Pope Francis, promoted the National Shrine of Our Lady of Walsingham to the status of a Minor Basilica.  One of the privileges of a Basilica is that it is allowed to display a papal ombrellino, which displays the heraldic arms of the Pope and the arms of the Basilica.  In March 2016 Dr Woolf arranged for the arms of the National Shrine, which are derived from the ancient Priory of Walsingham arms, to be adapted to incorporate the insignia of a Basilica.  These have been woven onto the ombrellino that is on display in the Basilica.

Vespers concluded with devotions at the image of Our Lady of Walsingham, after which the Commander presented the Rector with a new flag of the arms of the Basilica.  This was a gift from the Chaplain, Fellows & Students of Newman Hall (Cardiff University Catholic Chaplaincy), the Cardiff Oratory in Formation, and the Sisters of Nazareth.  The Commandery of Wales uses Newman Hall in Cardiff as its base.

Monsignor Armitage invited the members of the Commandery present to accompany him to the Basilica flagpole where he ran up the flag for the first time.

The return journey along the Holy Mile to Walsingham was concluded with a refreshing beverage outside Walsingham’s famous Bull Inn.

After supper the Commandery pilgrims joined the other two hundred weekend pilgrims for the traditional Saturday evening candlelit procession of the image of Our Lady of Walsingham around the Shrine grounds.

The following morning, Sunday, pilgrims worshipped at Mass at the Anglican Parish Church of St Mary or the Catholic Church of the Annunciation.  The Commandery pilgrimage concluded with the sprinkling liturgy at the well next to the Holy House in the Shrine Church.

All agreed that this Commandery pilgrimage was an amazing and rewarding mixture of the sacred and secular.  As the Chaplain-General, Fr Ian Evans, wrote in our pilgrimage itinerary, "When all is over and the return journey beckons, may you depart refreshed and revitalised in faith.  May that blessing and revival of Spirit, renew within you all, your dedicated service to the Military & Hospitaller Order of St Lazarus of Jerusalem."  We look forward to future pilgrimages to Walsingham, England’s Nazareth.  We fervently hope there may be an opportunity to organise a Grand Priory Pilgrimage to Walsingham.