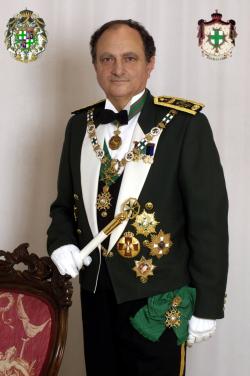 It is with deep sadness that we announce that the XLIX Grand Master of the Military and Hospitaller Order of Saint Lazarus of Jerusalem, His Excellency, Don Carlos Gereda y de Borbón, Marqués de Almazán, passed away at 7.00am on Tuesday 29th August 2017 at his residence in Madrid, Spain.

He  had been hospitalized a few weeks ago but after nearly ten days in the hospital he was taken home and, once there, received palliative care. He was surrounded by his loved ones and suffered no pain.  His body was interred at the family pantheon on August 30th at a private service.

His cousin, The Grand Master Emeritus, His Excellency, The Duke of Seville, Grandee of Spain, Francisco de Borbón y Escasany, as well as the Grand Prior of Spain, His Excellency The Marquis of Ariza, Grandee of Spain, Iván De Arteaga y del Alcázar, and the late Grand Master's Personal Assistant, Dame Patricia Pedrazas Freeman DLJ, will organize a Memorial Service in Madrid, probably in October. Details will be announced later.

In accordance with the Order’s Constitution, The Coadjutor, His Excellency The Chevalier Francisco de Borbón von Hardenberg, GCLJ, has become Interim Grand Master until the Chapter General elects a successor Grand Master.  We sincerely welcome his leadership.

May the legacy of our late Grand Master be forever lasting and let us all be a reflection of the Order he always wished for.