Election and Installation of the 50th Grand Master 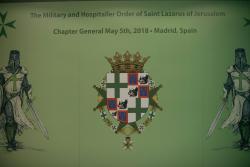 Saturday May 5 dawned bright, sunny and warm.  The previous evening those of us attending the Chapter-General had renewed acquaintance around the bar of the Hotel Meliá Madrid Serrano.  The Grand Priory of England & Wales was well represented, with 9 senior members of the jurisdiction in attendance, including our Grand Prior and Bailiff.

In total, nearly 250 members of the Order, from jurisdictions across the world, attended the Chapter-General, the largest gathering of members on record, to witness the election of HE Don Francisco de Borbon Graf von Hardenberg GCLJ as the 50th Grand Master of the Order.  The postal votes received had already confirmed that he had sufficient eligible votes to be elected and those of us present continued this trend by electing him by Acclamation.  Thereafter each Head of Jurisdiction present welcomed him as well as conveying the best wishes of their Jurisdictions on his Election. 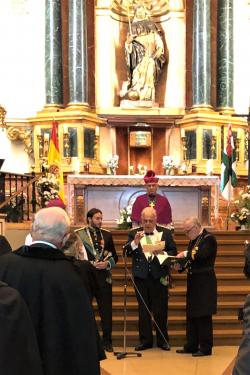 That afternoon, after a mass conducted by our Ecclesiastical Grand Prior, Don Francisco was installed as Grand Master at a solemn ceremony held in the church of the Monasterio de Santo Domingo el Real where he was proclaimed Grand Master and sworn in to this, the highest office of the Order, in token of which he received the Grand Collar as a symbol of his rank.  It was a low-key but moving service in a round church packed to capacity with members all wearing full regalia under church mantles.  It could have happened 900 years ago and would have looked very little different, reminding us of the historicity and continuity of our Order.

Later that evening a celebratory reception was held to allow members to meet the new Grand Master, to renew acquaintances and to make new ones.  Again, it was low-key, with no speeches or toasts, where member met member in a spirit of equality and fraternity and no-one was in a hurry to leave.  The new Grand Master walked among us as one of us and spoke with as many members as possible.

Thereafter we dispersed to have dinner and to return to our own jurisdictions enthused to help Don Francisco to take our Order into the 21st century, as relevant as it was in the 11th.