The Grand Master Emeritus, the Duke of Seville, visited London on 16th May to attend the Annual Banquet of the Worshipful Company of Wheelwrights at the Mansion House. The purpose of the visit was to support the Grand Priory of England and Wales and, in particular, its Vice Chancellor Chev Alan Culverhouse KCLJ who is currently Master of this ancient livery Company. 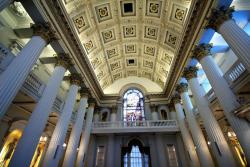 The Mansion House is the official residence of the Lord Mayor of London and used for many of the City of London’s most prestigious functions.

The Banquet was attended by 160 members of the Worshipful Company of Wheelwrights and their guests. The Order of St Lazarus was represented by HE the Chev Edward White GCLJ, the Grand Chancellor, the Bailiff of the Order in England and Wales, and several members of the Executive Council.

HE The Duke of Seville flew in to London especially to address the gathering and to show support for the Order in England and Wales. The Duke spoke movingly on the work of the Order which was most inspiring – afterwards guests approached HE Chev Gareth Vaughan to enquire about joining the Order and others asked how they could contribute to the work of the Order.

When the Worshipful Company of Wheelwrights was formed in 1670 it was obliged under its Royal Charter to provide trained Wheelwrights to His Majesty King Charles the Second and his successors. This association was evidenced by the Guard of Honour by Royal Artillery Cadets who greatly appreciated the attention they received from the Duke.

The Representative Lord Mayor – Sir Alan Yarrow – wrote after the event to say how much he was impressed by the Grand Master Emeritus’s eloquent speech.

Amongst the Liverymen of the Wheelwrights Company was the Lieutenant-General of Jersey, Sir Stephen Dalton and his personal guest Wing Commander Andy Green who holds the Worlds Land Speed record and is about to attempt to exceed 1,000 miles per hour(1609kph).