The Commandery of the English Midlands - King Offa - was represented at an outdoor service and flag-raising ceremony at Ashfield District Council Headquarters, Kirkby in Ashfield by the Commander, Chevalier Mario Rizzardi KLJ, accompanied by the Chancellor, 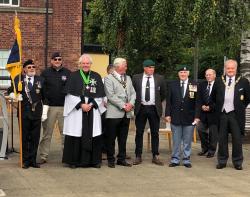 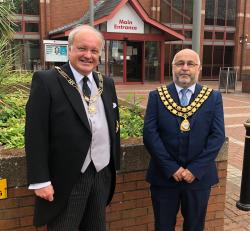 This service was held to mark the 75th Anniversary of VJ Day and the moment that finally brought the Second World War to an end. The service, led by the Commandery Chaplain The Revd Kevin Charles SChLJ, commemorated this anniversary and remembered those who served in the Far East.

They were welcomed by the Chairman, Councillor Andy Meakin for the very moving and thought provoking service.

'God our Father, in the dying and resurrection of your Son Jesus Christ, you have brought life and salvation out of cruelty and death. We mark the 75th Anniversary of VJ Day in gratitude for the courage of the Allied forces who suffered for freedom in the Far East campaign and in sorrow for all that hinders the coming of your kingdom in peace. God give us the wisdom to learn from the bitter memories of war, and hearts that long for the unity of all nations. We ask all this in the name of Jesus, in whom there is no East or west, north or south but one fellowship of love across the whole earth. Amen'