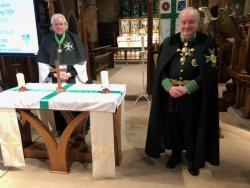 The Commandery of King Offa held an Evening Service to mark World Leprosy Day and raise awareness of Leprosy. It took place with Covid-19 precautions in the ancient parish church of St Wilfrid, Kirkby in Ashfield and was conducted by the Commander Chevalier Mario Rizzardi KLJ, assisted by his Chaplain Revd Kevin Charles SChLJ with Chevalier John Bullock KLJ, Chancellor at the organ. The service was recorded by Mrs Dora-Leigh Chadwick.

World Leprosy Sunday was initiated in 1954 by French philanthropist and writer, Raoul Follereau, as a way to raise global awareness of Leprosy and call attention to the fact that it can be prevented, treated and cured. Many people believe Leprosy is extinct, when in fact many new cases are diagnosed each year. In addition, there are people living undiagnosed, leaving them at risk of disabilities.

As well as raising awareness, prayer was offered for those affected by Leprosy and by the prejudice and discrimination that often results from it.

You can watch the service here:  https://youtu.be/AtHvW4lHN70