The International Pilgrimage of the Order in June was a great success, increased by the attendance of the Grand Master and the Grand Master Emeritus, and everyone attending was very appreciative of the work and effort that had gone into preparing for the event.  The weather was perfect: not too hot, with glorious sunshine throughout.  It would be difficult to choose better locations anywhere in Italy.  Both Palermo and Monreale are filled with magnificent ancient monuments and churches steeped in history.  The atmosphere among members attending was formal  where required, but generally relaxed and very confraternal.  Many new acquaintances and friendships were developed over the three days.  The closing Celebration Dinner was memorable and a fitting conclusion to this celebration of the life of St Louis and of our Order.

The first day comprised a series of presentations about the history of the Order from its earliest times, through a period of schisms and intrigue to the last 18th century Statutes of the Order and the legal succession to the presentation of a superb new Handbook on a variety of current protocols and regulations which continue the progression of the Order into the 21st century. 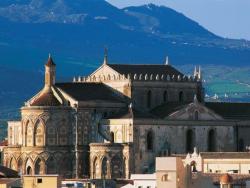 The meeting of Heads of Jurisdiction, at which over 30 Jurisdictions were represented, received reports from the Grand Officers of the Order.  In addition there was a presentation by the Chairman of the International Public Relations and Communications Committee on the progress which has been made on inter-jurisdictional communications and their profile on the international website coupled with the huge challenges which still remain to make this process fully functional and to create a 21st century external profile for the Order.  There was also an interesting update on the succession planning exercise currently being undertaken at international and jurisdictional levels on behalf of the GMC.

After the close of the formal business, attendees were divided into small focus groups to explore ways in which new, younger members can be attracted to the Order.  A compilation of the ideas produced will be presented to the GWC at its next meeting.

Vespers was celebrated at the Anglican church in Palermo on Friday evening.  This was a moving, simple service which reminded us of the purpose of the Order, of our attendance at the pilgrimage and of the piety and example of St. Louis. 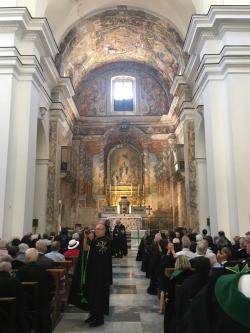 The following morning members wearing mantles processed through the streets of Monreale to the Chapel of the Teutonic Knights which had been opened specially for the Order.  The service of thanksgiving, dedication and commitment, presided over by the Patriarch, the Ecclesiastical Grand Prior and the Deputy Grand Chaplain General, was a moving and uplifting event reminding us of our heritage in the presence of the souls of so many past heroes of the Christian faith.

Following this, members processed solemnly to the Cathedral which is breathtakingly beautiful.  As they arrived a festal fanfare and voluntary accompanied their procession down the centre aisle.  There followed a service of thanksgiving and rededication followed by a vigil at the tomb of St Louis.  The quiet solemnity of the vigil in contrast to the joyful celebration of the earlier service brought home the commitment and holiness of life required of each of us as members of the Order and our dedication to relieving suffering throughout the world, especially as a result of leprosy, on which our Order was founded nearly 1,000 years ago in Jerusalem.