The Autumn National Investiture of the Grand Priory of England and Wales was held in the Grosvenor Chapel, Mayfair on Saturday 27th October 2018.

The Grand Priory was honoured with the presence of the Grand Master Emeritus of the Order, The Most Excellent Don Francisco de Borbón y Escasany, 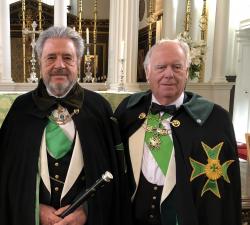 Duke of Seville GE as Investing Officer, assisted by the Bailiff, HE The Chevalier Charles Holloway GCLJ, KMLJ.  With members, visitors and guests in attendance, the Grand Master Emeritus, the Bailiff , clergy, Members of the Grand Priory and distinguished guests processed into Church. The service was led by the Chaplain-General, The Rev’d Canon Victor Bullock SChLJ assisted by several Chaplains of the Order. The Sermon was delivered by The Rt Rev’d Paul Hendricks, Auxiliary Roman Catholic Bishop of the Archdiocese of Southwark, Titular Bishop of Rosemarke,  who took as his theme the phrase ‘Our Lords the Sick’ from the Order’s prayers of intercession. 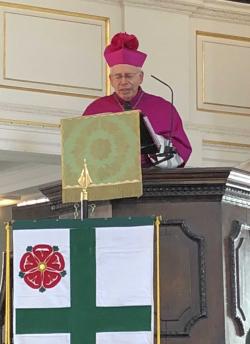 The Investiture then commenced, with several postulants being admitted into the Order. Promotions and Awards followed, including the presentation of the Meritorious Service Decoration (given to recognise 20 years continuous service in a senior office) to HE the Chevalier David Gibb GCLJ and our Chancellor, Chevalier Norman Hunter Rose KCLJ.  The Investiture service concluded with the Grand Master Emeritus conferring, by express command of his son, the current Grand Master, HE Don Francisco de Borbón Count of Hardenberg GCLJ, the promotion of Alderman Chevalier Vincent Keaveny to the illustrious rank of Knight Grand Cross of Justice (GCLJ).  Chevalier Keaveny has just taken office as Sheriff of the City of London.  This promotion was received with great acclaim by all those present at the Investiture.  The new Sheriff was wearing his Shrieval chain and badge of office, which incorporates the Cross of our Order.

Members then re-dedicated their lives to the service of God through the most noble Order followed by the blessing, dismissal and National Anthem. The St Lazarus Singers, led by Confrere Edward Dobson OLJ, complemented the Investiture with their singing which included O Nata Lux de Lumine and Salvator Mundi by Thomas Tallis.  The Cavalry and Guards Club in Piccadilly was the venue for an excellent banquet to conclude this highly successful and memorable day. 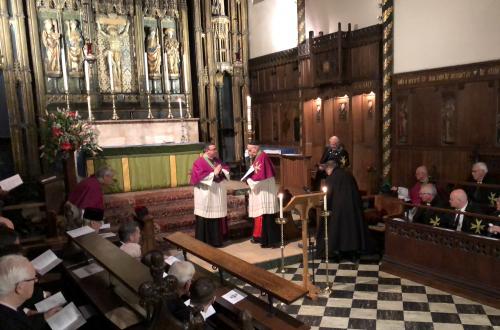 The Vigil before an Investiture was held on the previous evening at St Paul’s Church, Knightsbridge, London and was again conducted by The Chaplain-General, assisted by Chaplains of the Order. Canon Brendan Clover SChLJ, Executive Chaplain of the Commandery of Wales, delivered a thought provoking and prayerful meditation on the Beatitudes followed by Postulants taking their vows. The Charge to Postulants was delivered by the Secretary-General, HE The Chevalier Gareth Vaughan GCLJ. Following the Vigil, a delicious meal was enjoyed at The Royal Air Force Club. A wonderful and spiritually enriching occasion, the London National Investiture was certainly a highlight in 2018 for The Grand Priory of England and Wales.