The Commandery of Cumbria was privileged to host the Spring National Investiture of the Grand Priory in Carlisle on the 17-18 April. The heavens smiled upon us and we were treated to glorious weather on both Friday and Saturday.

The Vigil Service was held at Lanercost Priory, on Friday evening, conducted by the Chaplain-General, Colonel The Reverend Fr. Ian Evans SChLJ, MMLJ, SCF. Members were then taken to Naworth Castle, home of the illustrious Howard family. Here they were welcomed by the owner, Philip Howard, brother and heir presumptive oif the 13th Earl of Carlisle, who gave a brief and informative talk on the Howard family. Members were then allowed to explore parts of the castle, including the magnificent library, before returning to the Banqueting Hall for an excellent supper before a blazing long fire of gigantic proportions. 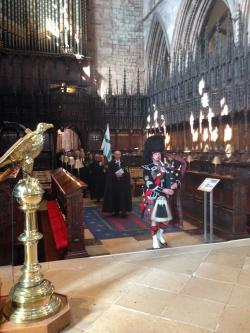 Saturday morning saw the Investiture in Carlisle Cathedral. The procession was piped into the cathedral by Chevalier David Waterton-Anderson KSG, where the service was conducted by the Chaplain-General. The Dean of Carlisle, The Very Reverend Mark Boyling, preached and we were honoured to have our Grand Prior, The Most Honourable The Marquis of Lothian PC, GCLJ, QC, DL, as the Presiding Officer.

During the service, Emily Milburn sang Gounod’s "Ave Maria", and Frances Sutton the "Laudate Dominum" from Mozart's Solemn Vespers. Both motets were accompanied by Harry Jacques, the organ scholar at Carlisle Cathedral.

After the Investiture, the piper led members in procession to a reception and lunch at The Crown & Mitre Hotel.

Following lunch, a trip on a steamer down Ullswater had been arranged. The afternoon was glorious, the sky over the lake cloudless, as about 30 members and guests enjoyed this pleasant and relaxing conclusion to a most successful national event.