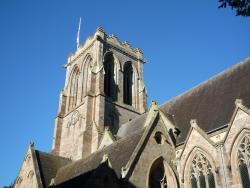 The 2016 Spring National Vigil & Investiture of the Grand Priory took place at Belmont Abbey, Herefordshire, hosted by the Commandery of Wales whose Commander, Chevalier Dr David Woolf KLJ, is to be congratulated on his hard work and attention to detail, which contributed in no small part to a successful occasion.

Nearly 70 members and guests attended the Vigil at 7.00pm on Friday 15th April in the Abbey Church at Belmont, during which 9 postulants made their vows of dedication before the Chaplain-General, Colonel The Revd Fr Ian Evans QHC, SChLJ, MMLJ, and all were led in meditation upon The Beatitudes. The Grand Prior, The Most Honourable the Marquis of Lothian PC, GCLJ and the Bailiff, H.E. The Chevalier Charles Holloway, GCLJ, KMLJ were in attendance. Afterwards, a dinner at Hedley Lodge, formerly part of the Benedictine Community’s buildings, fortified the inner man.

The next day at 11.00am the Service of Investiture was held, over 90 members and guests attending.

Members of the Order processed in to the Abbey Church to the solemn “Choral” from the Suite Gothique by Leon Boellmann. Eight Chaplains attended the Chaplain-General in the sanctuary and the Abbot of Belmont, the Rt Revd Dom Paul Stonham OSB, was the preacher. Music was provided by The Newman Hall Schola under their Director of Music, Dominic Neville MA. Anthems sung were: ‘O taste and see’ by Ralph Vaughan Williams (1872-1959), between the First Reading and the Gospel, and ‘Thou knowest, Lord, the secrets of our hearts’ by Henry Purcell (1659-95) before the Intercessions. The Gospel was read by The Revd Fr John Owen SChLJ, Chaplain of the Commandery of Wales, and the The Revd Fr Ray O’Shea TD, ECLJ, Chaplain Emeritus of the Commandery (and a former Chaplain-General of the Grand Priory) conducted the Intercessions. During the hymn preceding the Ceremony of Investiture, a collection was taken for the work of the Benedictine Community at Belmont. 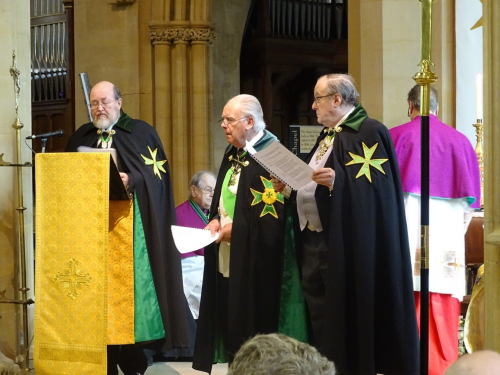 The Investing Officer was the Grand Prior, assisted by the Bailiff and the Secretary-General, Chevalier Gareth Vaughan KCLJ. The Marshal was Chevalier Peter Salt, KCLJ.

The service concluded with the ‘Regina Coeli’ and a blessing from the Abbot of Belmont, after which the National Anthem was sung and members processed out to the ‘Toccata’ from Boellmann’s Suite Gothique.