The beautiful setting of St Paul’s Church, Knightsbridge, London saw the National Investiture of the Grand Priory of England and Wales on Saturday 29th April 2017.

With over 150 members, visitors and guests in attendance, the Choir of St Paul’s sang the Introit ‘I was glad’ as the Investing Officer, the Bailiff H.E. The Chevalier Charles Holloway GCLJ, KMLJ, Clergy, Members of  the Grand Priory and distinguished guests processed into Church. The service was led by the Chaplain-General, The Revd Canon Victor Bullock SChLJ assisted by several Chaplains of the Order. An inspirational Sermon on St Lazarus was delivered by the Rt Revd Robert Ladds SSC, former Bishop of Whitby, Superior-General of the Society of Mary. The Investiture then took place with several postulants being admitted into the Order. Then followed Promotions and Awards together with the Appointment of the new Deputy Bailiff of the Grand Priory of England and Wales, Jonathan Charles Whitaker.

Members then re-dedicated their lives to the service of God through the Order. The ‘Regina Coeli’ was sung followed by the blessing, dismissal and National Anthem. The Royal Thames Yacht Club, founded in 1775, was the venue for an excellent banquet to conclude this highly successful and memorable day. 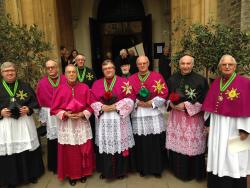 The Vigil before an investiture was held the evening before at The Grosvenor Chapel, Mayfair and was conducted by the Chaplain-General who, assisted by Chaplains of the Order, led a meditation on the Beatitudes followed by Postulants taking their vows. The Charge to Postulants was delivered by The Secretary-General H E The Chevalier Gareth Vaughan. Following the Vigil, a delicious meal was enjoyed at The Cavalry and Guards Club overlooking Green Park in Piccadilly.

A wonderful and spiritually enriching occasion, the London National Investiture was certainly a highlight of this year for the Grand Priory of England and Wales.