It is with great sadness that the death is announced of Mr Cat, de facto Master of Newman Hall, Catholic Chaplaincy, Cardiff University.  Mr Cat was famous amongst the numerous visitors to the Chaplaincy for his rigorous teaching of the Catechism of the Church.  He was an honorary member of the Commandery of Wales of the Military & Hospitaller Order of St Lazarus of Jerusalem and the Venerable Pelican Club, whose dinners he frequently attended to ensure that decency and good table manners were correctly exercised.  His last appearance was at the recent Aid to the Church in Need fundraiser where he characteristically upstaged Fr Sebastian’s after dinner speech.

Mr Cat was a keen huntsman, bagging many big game specimens including a Mother Superior and an Oratorian novice.  As with all Newmanites, he was a well-read scholar.  He was the editor of Magnificat a monthly publication of readings for the daily Office. 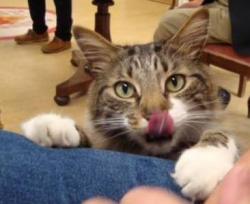 Alas, his last scholarly work ‘A Catalogue of Ambrosian e-bay purchases’ was unfinished at his death.  In January 2018 he made a guest appearance in Country Life (‘Lord of the manor’ January 8th).  He was unmarried.