Pilgrimage to the Shrine of Our Lady of Walsingham

Inspired by a pre-pilgrimage message written by our Joint Commandery Chaplain, Canon Brendan Clover SChLJ, on Friday 9th August thirteen members of the Commandery of Wales travelled 250 miles across the country to north Norfolk for a weekend pilgrimage at the ancient Shrine of Our Lady of Walsingham.  Three of the group were Walsingham neophytes.  A pilgrimage station was made at the Pontifical Shrine of Our Lady of Walsingham in King’s Lynn.  Established in 1897 by Pope Leo XII, in a replica of the Holy House of Loreta, this is the first shrine to Our Lady of Walsingham that was established in the country since the Reformation.  The Assistant Shrine Priest, Fr Gordan Adam, delivered a brief history of the shrine church covering its fascinating links with the Gothic revival architect Augustus Pugin, the nearby royal residence at Sandringham and the members of several European Catholic royal households who when visiting Sandringham would worship at the Pontifical Shrine Church in King’s Lynn.  Our joint pilgrimage chaplain, Fr Alexander Gee of the Cardiff Oratory, offered first visit devotions for the pilgrimage group in the Pontifical Shrine, concluding with a recitation of the Litany of Our Lady of Loreto.

On arrival in Walsingham the Commandery group joined other weekend pilgrims in the Anglican Shrine Church for Vespers.  After supper the Administrator of the Anglican Shrine, the Revd Kevin Smith, gave the Commandery pilgrims a ‘nooks and crannies’ tour of the Shrine, revealing many fascinating features and treasures not usually seen by the regular pilgrims.  One highlight was seeing a chasuble fabricated from material from the wedding dress of Queen Marie Antoinette.  Our tour concluded with a drinks reception hosted by the Administrator in the Guardians’ ancient dining room in the College, where more treasures and artefacts of the Shrine were on display.

On Saturday morning the pilgrimage chaplains celebrated their daily Masses.  Fr Alexander said an Old Rite Mass in the Slipper Chapel at the Basilica, and Canon Clover celebrated in the Holy House of the Shrine Church.  After lunch the pilgrims gathered next to the site of the mediaeval leprosarium and then walked the Holy Mile along the disused railway to the Slipper Chapel.  En route we visited the Orthodox Chapel of St Seraphim, based in the old village railway station.  The Commander gave an impromptu talk describing the history of the chapel and the former iconography studio of the St Seraphim Brotherhood, which was based in the basement of the chapel.  He also showed the Commandery pilgrims the prototype of the icon of Our Lady of Walsingham, written by the late Fr David and Bro Leon of the St Seraphim Brotherhood, and described its various features.  The most recent version of this icon is venerated in the Little Oratory at Newman Hall, Cardiff.

On arriving at the Basilica of our Lady of Walsingham the pilgrims gathered in the Slipper Chapel.  With the permission of both the Bailiff and the Rector of the Basilica the Commander, assisted by the Marshal, Confrère Haydn Rees CLJ and Canon Brendan Clover SChLJ, invested Fr Alexander with the insignia of a Member of the Companionate of Merit (MMLJ).

Fr Alexander officiated at Commandery Vespers in the Slipper Chapel assisted by Canon Clover and the Commander.  The Rector of the Basilica, the Rt Revd Monsignor John Armitage, was the homilist.

On completing the return journey of the Holy Mile the pilgrims gathered in the upper common room of Richeldis House for a sherry wine reception hosted by Confrère Haydn Rees.

After supper the Commandery group joined the other weekend pilgrims for a candlelight procession of Our Lady of Walsingham around the Shrine grounds led by our Marshal who was the crucifer for the procession.  As a Member of the Order of Our Lady of Walsingham the Commander had the privilege of escorting the image with the Guardian Administrator.  The evening concluded with Commandery pilgrims enjoying the hospitality of the Black Lion Inn, the hostelry named after the black lion on the Arms of Queen Philippa of Hainault, wife of Kind Edward III.  It is reported that the Queen resided at this inn whilst on pilgrimage to Walsingham in the 13th century.

On the Sunday morning the pilgrims either worshipped at the Slipper Chapel, where Fr Alexander again celebrated an Old Rite Mass, served by the Commander, or at the Eucharist in the Anglican parish church, where Canon Clover concelebrated with the Revd Dr Harri Williams, Vicar of Walsingham.

Early on Sunday afternoon the Commandery pilgrims gathered for the rite of sprinkling administered by the pilgrimage chaplains, and the last visit devotions in the Holy House.

Here would we ever dwell,

But Jesus calls us to the strife

And tumults of our daily life,

Thank you to all who made this second Commandery pilgrimage to Walsingham a very special occasion. 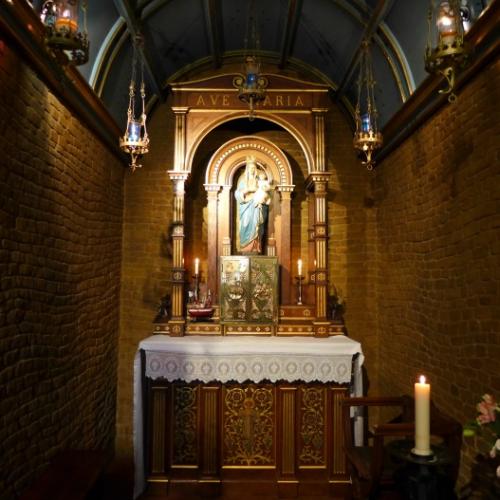 Pontifical Shrine of Lady of Walsingham in King’s Lynn 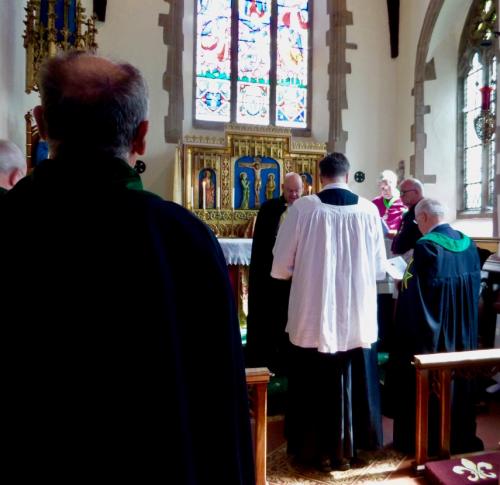