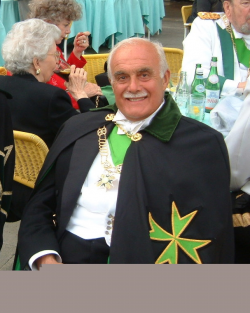 A Solemn Requiem Mass for the late Lord Ferrers was celebrated on Saturday 19th January, 2013, at 12.30pm in the Church of St Magnus the Martyr, Lower Thames Street, London, by kind permission of the Cardinal Rector, The Revd Fr Philip Warner.

The service was attended by the Grand Master, H.E. Don Carlos Gereda de Borbon, Marques de Almazan; the Grand Commander of the Order, H.E. Drs Ron Hendriks GCLJ; the Grand Hospitaller, H.E. Dr Axel Mittelstaedt GCLJ and the Grand Justiciar, Chevalier Vincent Keaveny KCLJ. The Grand Priory of Ireland was represented by its Grand Prior, H.E. The Chevalier Bernard Barton GCLJ, accompanied by five other members of the jurisdiction, while the Grand Bailiwick of Scotland was represented by H.E. The Rt Hon. the Viscount Gough GCLJ (Prior). The Spiritual Protector of the Order was represented by The Very Revd Fr John Salter ECLJ. The event was hosted by the Bailiff of England & Wales, H.E. The Chevalier Charles Holloway GCLJ.

Despite the inclement weather, over 50 members of the Order came to pay their respects to a man who inspired admiration and affection in all who were privileged to know him.