Membership of the Order of St Lazarus comes through local groups (Commanderies) which are the initial point of contact for new members.  After nomination by the local Commander, suitable individuals may be invited to join the Order.

In common with other Christian Orders of chivalry founded during the Crusades, such as the Venerable Order of St John and the Knights of the Holy Sepulchre, the Order of St Lazarus still aims to defend Christianity while expecting its members to practise the Christian tenets of protecting the weak, helping the sick, and promoting justice. A solemn undertaking to maintain this code of conduct is made before God and the assembled congregation on formal admission to the Order.

Membership entails an ongoing commitment to sustain and promote the Order's aims through prayer, annual oblations, regular charitable giving and, as far as possible, by helping to organise and participating in its charitable events. The Commanderies arrange a variety of local functions each year which members are expected to support, in particular the annual church service of their Commandery.  As in all chivalric orders membership is an honour, and promotion is never solicited. It is awarded to reflect experience, service and commitment to charitable work. 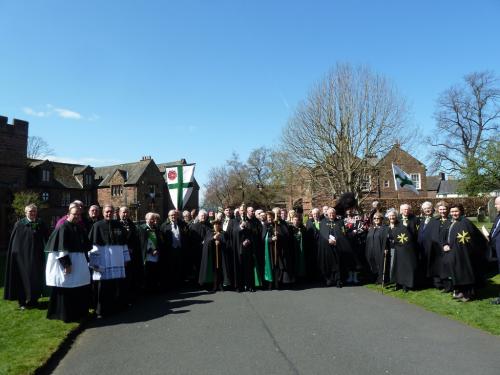 Members of St Lazarus form a spiritual fraternity. The ceremonies of the Vigil and Investiture, the wearing of the mantle and the green Maltese cross are more than ritualistic maintenance of an ancient tradition; they are outward symbols of fraternity and dedication to Christianity. The pursuit of unity is shown by respecting the other Christian confessions represented in the Order, each member living as faithfully as possible in their own tradition, whilst working and praying together for true unity.

Reflecting its historic origins, the charitable work of the Order in England & Wales focuses especially on the relief of leprosy.  Funds raised at local and national events, and donations from members and friends of the Order, are allocated to a range of projects, under the auspices of the St Lazarus Charitable Trust.