The Order in England & Wales

By the 12th century, the Order of St Lazarus had found its way into Europe and established itself in France, Germany, Italy, Sicily and the British Isles.

Its first appearance in England was during the troubled reign of King Stephen (1135-1154). A hospital was

established at Burton in Leicestershire and in 1177, through the offices of Sir Roger de Mowbray, a Royal Charter was granted by King Henry II. The hospital at Burton Lazars, as it was later called, became the chief house of the Order in England. It was administered by a Master as well as eight knights, and was under the protection of the Blessed Virgin and Saint Lazarus. In succeeding years, many hospitals and commanderies were erected in England and, at one period, the Order possessed as many as 95 leper houses throughout the kingdom.

In Scotland, the Order acquired considerable prestige under Robert the Bruce. A commandery was founded by Royal Charter, issued by Alexander II (1214-49) and administered from Linlithgow, where it had its headquarters. Lazar houses were founded in various parts of the kingdom.

During the Middle Ages the Order of Saint Lazarus fulfilled a dual mission. As a military power, it operated a flotilla of warships in the Mediterranean to protect important sea routes against pirates and marauders, while, at the same time, the Hospitallers of Saint Lazarus protected and treated the victims of leprosy, which had become something of a scourge throughout Europe.

As the disease decreased in England, the Order became more secularised. The end came in 1544 when Henry VIII, having dissolved the religious houses, turned his attention to the Hospitallers. Their properties and wealth were seized and the Order, and that of Saint John, was prohibited, its members being forbidden to wear the habit or use any of its distinctive titles. While this marked the close of the Order's activities in England, it was not the end altogether, as English and Scottish Knights of the Roman Catholic faith continued to be admitted to the Order in Europe.

In 1960, as a result of an initiative by Lieutenant Colonel Gayre of Gayre and Nigg, the English Tongue was founded. It consisted of Priories of England, Scotland, Ireland and Canada, as well as the Commandery of Lochore and a number of Bailiwicks in the Commonwealth. Added to this was a remarkable expansion of the Order in the United States. It soon became evident that the balance of forces leaned in favour of the Anglo-Saxon jurisdictions, the majority of whose members were Protestant. 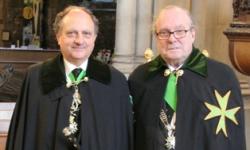 The current Grand Prior is the Most Hon. Michael Andrew Foster Jude Kerr, 13th Marquess of Lothian, Baron Kerr of Monteviot, PC, GCLJ, QC, DL.  He was invested by the Grand Master at a service held at the church of All Hallows by the Tower, London on 29 October 2013.